Three students and their professional mentor traveled to the village of Mbirbua on the first of five trips to build a bridge for the community.

Imagine trying to cross a bridge made of twigs and chains just to get to work. This is a daily reality for the village of Mbirbua in Cameroon, where villagers make a living trading on foot even during the extremely dangerous rainy season.

The need for a new bridge is one of importance to Manhattan College’s student chapter of Engineers Without Borders (EWB), a nonprofit humanitarian organization established to support community-driven development programs worldwide. The chapter is currently working to raise money and to develop plans to construct the much-needed bridge.

The College’s student chapter was officially recognized in 2011 by EWB, and shortly after, the group petitioned for the service opportunity in Cameroon. Since the project was awarded to Manhattan College, the group has worked with faculty advisers and their professional mentor to organize the first trip to Cameroon.

The planning for this first trip involved substantial fundraising to facilitate travel to Cameroon and acquire supplies. The group worked extensively with faculty advisers Elizabeth Lennon, Ph.D., assistant professor of chemical engineering, and Goli Nossoni, Ph.D., assistant professor of civil and chemical engineering, on the details for the trip.

“In this respect, EWB’s mission closely aligns with the commitment to social justice embedded in Manhattan College’s Lasallian mission, and gives students, particularly in the School of Engineering, a tangible way to directly realize their engineering skills in a wider Lasallian context,” Lennon says.

On March 14, David Pecorini ’14, Carolyn Brazier ’14 and Anita Hot ’15 and their professional mentor, Patrick Arnett, P.E., structural engineer from Robert Silman and Associates, met at JFK airport to embark on the first of five trips to Mbirbua to bring a sustainable bridge to the village. 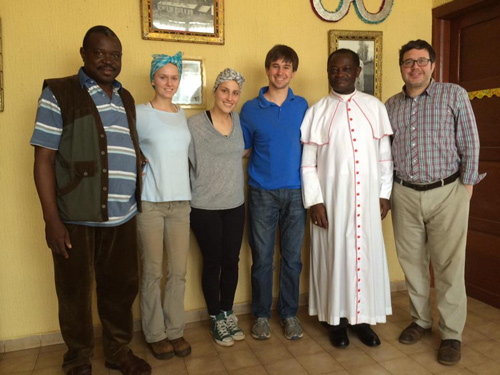 “The first assessment trip consisted of visiting the site, meeting the community and determining how much materials cost in Cameroon,” says Pecorini, a civil engineering graduate student. “We also collected data on the bridge design that we’re going to use to develop our budget.”

The team arrived in Duala, Cameroon’s largest trade city on March 15 and was greeted by Emmanuel Sengafor, who works for the Social Welfare District of Kumbo Parish, which originally contacted EWB about the need for the bridge. Sengafor explained the importance of the project to the team, which then departed for Kumbo, the second largest city in the Northwest Province of Cameroon. Shortly after arriving, they met Monsignor George Nkuo, bishop of the Diocese of Kumbo.

EWB’s mission closely aligns with the commitment to social justice embedded in Manhattan College’s Lasallian mission, and gives students a tangible way to directly realize their engineering skills in a wider Lasallian context.

After three days of traveling, the team finally arrived in Mbirbua at the bridge site, where 100 villagers welcomed them with singing and clapping. They were guided over the rocks on the river to the village quarters and met with the chief.

“The first thing that we did when we got there was to make sure that the community wanted a bridge,” explains Brazier, a civil engineering major. “We had them list five needs in order from least important to most important, and they were all in agreement that the bridge was number one.”

The chief also told the group that his father passed away crossing the bridge during the rainy season — another serious example of the need for the bridge. The rainy season, which lasts from April to August, can raise the water to four feet, and flash flooding contributes to the dangerous conditions.

The remainder of the week consisted of assessing and surveying the site of the future bridge. They collected daily soil samples to assess the foundation, and also taught the villagers about the equipment and how to use it. The team borrowed a total site tool from the School of Engineering in order to take the typography of the land.

The data collected during the trip will be presented in a post-assessment document, which will discuss everything the group did on the trip, the lessons they learned, and what can be improved for next time.

Planning for the Future

The trip to Mbirbua ended with a formal EWB agreement to acknowledge the project and responsibilities of all parties. The Manhattan College group also presented the village with school supplies they had collected and brought with them.

“This experience was valuable for me even though I don’t have any knowledge in civil engineering. It really helped me figure out what it’s like working with a group of people outside of the classroom,” says Hot, a chemical engineering major. “When you go to a third-world country and have to deal with things that you had not planned for, you to learn how to improvise.”

Upon returning to campus, the EWB team put together the post-assessment document and started making plans for next year’s trip. The next step in the process involves more fundraising to contribute to the trip in 2015 to design the bridge’s design foundation, which will consist of soil excavation and concrete pouring for piers for the bridge.

In addition to the Cameroon bridge, EWB is planning local volunteer opportunities, including working with Habit for Humanity in Breezy Point.

“Our involvement with Engineers Without Borders allows us to use the skills that we’ve developed to actually help people in need,” Pecorini says.