Math and Soccer Merge at Manhattan 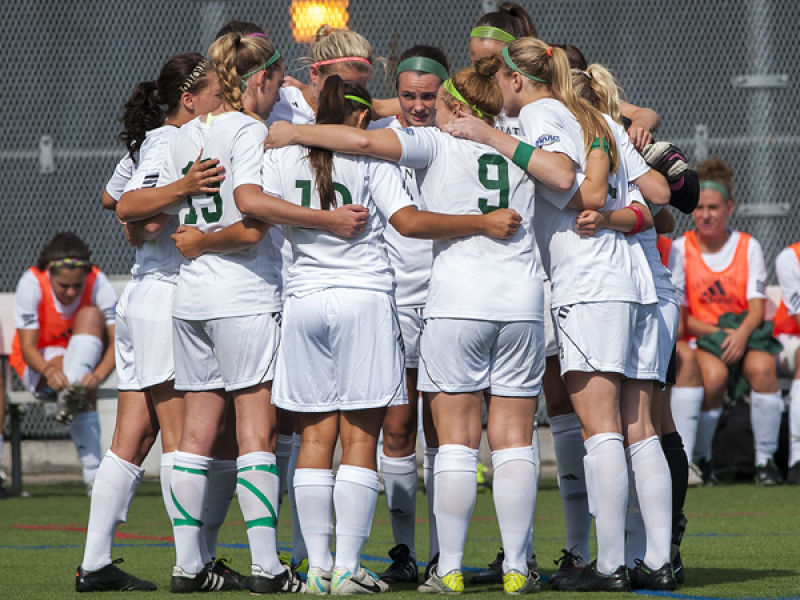 Jasper soccer players Alexandra Iovine ’14 and Janie Schlauder ’14 are using their mathematical prowess to help Manhattan get ahead on the field.

Inspired by a paper that uses central network theory to analyze passing networks within the 2010 World Cup soccer teams, they decided to apply similar mathematical techniques to measure their own teamwork, an elusive quality that’s missed in most sports statistics, which focus on individual players.

With the guidance of Helene Tyler, associate professor of mathematics, and assistance of Brendan Lawler, head coach of the women’s soccer team, they investigated the Jaspers’ passing networks with the hopes of tracing how those networks developed during the fall 2013 MAAC season.

The easiest way to understand passing networks, Iovine explains, is by visualizing them.

“Imagine that each player on the team has straight line to every other player,” Iovine says. “With each completed pass, you draw an arrow from the passer to the receiver, weighting those arrows by how many completed passes there are. That gives us what we call a directed weighted network.”

Using different centrality measures, they determined the relative importance of each player in the game. These findings gave the coach information about how well the players work together as a team and if his training techniques are helping them improve over time.

The project began in fall 2013 after Tyler happened upon the paper, “A network theory analysis of football strategies.” What the mathematician and all-round math enthusiast found was “totally cool;” a showcase of some tools from network theory that were used to describe the strategy of football teams.

“These ideas were borne from completely different kinds of applications,” Tyler says. “They’re applied to all sorts of different areas in business, economics and military — even Google — and here they were being applied in a novel way to soccer.”

Using the paper as a model, Tyler developed an upper-level elective course that investigated the theoretical mathematics behind the soccer application. Naturally, Iovine and Schlauder, both math majors and seniors on Manhattan’s women’s soccer team, were the first to sign up. They also went the extra mile collecting some data from their fall 2013 season to test their newfound skills, and eventually presented their findings, Pitch Perfect? Analyzing the Passing Networks of Manhattan College Women’s Soccer at the 2014 Joint Mathematics Meetings in Baltimore on Jan. 18. 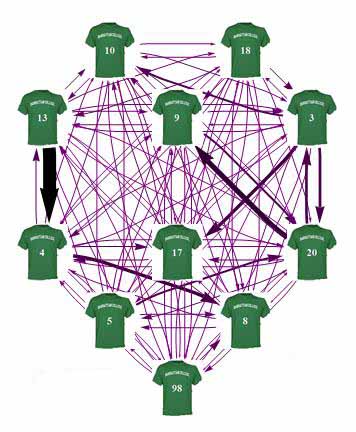 During this experience, Iovine and Schlauder realized the differences between professional and collegiate play and make collecting clean data nearly impossible during conference matches. In the professional arena, one player plays one position, but in collegiate play, student-athletes play multiple positions, subbing in and out as the game progresses.

Motivated to apply their math-savvy skills to the team, they continued their efforts in spring 2014 and developed a model that would create an environment to extract clean data. Lawler agreed to film miniature, 10-minute games during the team’s regular practices — four on four, six on six, and eight on eight  —  and follow a schedule to avoid repeated clusters over the course of the semester. It was a substantive collaboration between academics and athletics.

Overall, the study connected the team’s style and strategy to their overall performance on the field, and reinforced that their outside defenders and the center midfielders are the most important when it comes to getting the ball from one side of the field to the other —closer to the opponent’s goal.

They also found that defensive player Shannon Garrity ’15, had the highest connection scores in multiple games.

“In other words, our data showed that other players wanted to pass to her — she was a popular player on the field,” Schlauder says, noting that their findings were reinforced when Garrity was appointed team captain at the end of the spring semester.

“From a coaching perspective, it helped our coaches look and see what players play better positions recruiting-wise,” Schlauder adds.

For both Iovine and Schaudler, this exercise wasn’t just about bolstering future women’s soccer teams. Their newfound skills in Microsoft Excel and statistical analysis led to post-graduation opportunities. Iovine landed a highly sought-after internship with Major League Baseball (MLB), and Schlauder is serving as a business analyst for LifeCare in Shelton, Conn.

Although they’ve graduated, they’re continuing on with their research. In fact, they’re even gaining a new collaborator. This summer, as the 2014 World Cup reaches a fever pitch, mathematics and computer science major Andre Oliveira ’15, who was in the fall 2013 research seminar and awarded a Summer Research Fellowship at Manhattan, will assist in continuing their research.

“Through this project, Alex and Janie have seen that their studies have given them a wealth of applicable skills,” Tyler says. “I am excited to have Andre join the effort, too. His fresh perspective and additional skills from computer science could lead us down a whole new path.

Tyler adds, “I honestly don’t know what we will discover, which is what makes research so exciting.”