An internship took Shannon Butler ’16 all the way to NYC Fashion Week. 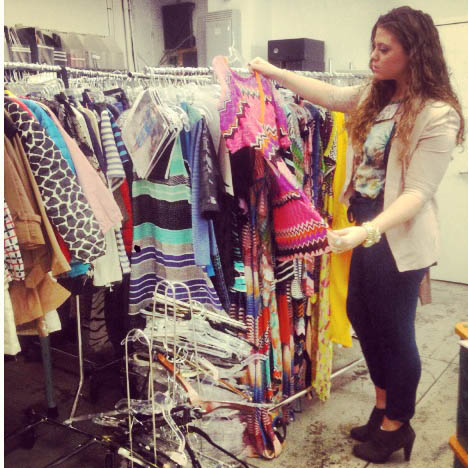 Shannon Butler ’16 can trace her career ambitions all the way back to an impulse purchase — an issue of Vogue Magazine — at a mall in Plainfield, Ill., when she was 8 years old. She read it cover to cover, and was captivated by every layout.

“When I realized that fashion could be a career path, I committed to it 100%,” Butler says.

She has been New York City-bound ever since.

Rather than specializing in merchandising at a fashion and design institute, Butler decided that the wisest approach was investing in a solid liberal arts education.

“When I visited Manhattan College, [and experienced] the small campus and the closeness to the city, it was a done deal,” she says.

The sophomore marketing major didn’t waste any time getting her foot in the door. Butler is a member of the Manhattan College Fashion Association, and studied abroad in London during Manhattan College’s 2013 January Intersession.

Perusing freefashioninternships.com, she found a position as a showroom intern with fashion PR company Caro Marketing during fall 2013.

Her newfound professional network landed her a position as an accessories intern at C&M Media and a backstage pass to the 2014 New York City Fashion Week.

On a normal day, she personally assists with two clothing lines, Sally Lapointe and Lie Sang Bong, overseeing sample trafficking en route to fashion magazine photo shoots and coordinating press previews. But with Fashion Week in full force, Butler was involved in every aspect of the runway shows, from assisting with seating, gift bags and VIP check-in, to helping the models get organized and ready backstage.

“It was a fantastic and exciting experience,” she says.

When she graduates, Butler is confident that she’ll emerge with both the skills and résumé to pursue any market, but she has her eyes set on Elle Magazine.

“I’m getting a degree and the experience to back it up,” she says, adding: “Ultimately, fashion is business.”