Maria Maust-Mohl, professor of psychology, and a leading authority on animal communication and behavior, hopes to learn more about the sounds animals make and how the environment affects these sounds for species in zoos and in the wild. 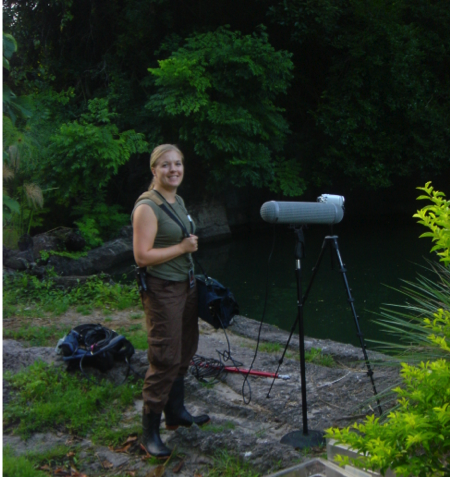 How do animals interact and communicate? How does the environment affect these signals?

These are just a few questions that are being asked of Maria Maust-Mohl, assistant professor of psychology. For the better part of a decade, she has been studying the behavior and communication of hippopotamuses, giraffes and dolphins, and establishing herself an expert on the sounds those animals make.

With a focus on zoo animals, she’s conducted years of research at Disney’s Animal Kingdom and the Adventure Aquarium in Camden, N.J. She and her students have made routine trips to the Bronx Zoo to study giraffes. In the summer of 2014, she plans to take several more students to the Bahamas as part of a study abroad program to observe and analyze dolphin behavior and sounds, in collaboration with the Oceanic Society.

This all has a purpose. Environments shape the communication signals used by animals.

“Understanding the way animals communicate with sounds will allow us to learn more about how they have adapted to their environments and enables us to protect and manage them better, both in zoos and the wild.”

Hippos play a major role in Africa’s ecosystem, fertilizing the rivers so that fish can thrive, and blazing pathways in the rivers and swamps where they live, draining water and creating divots for other animals to move around. They’re also dwindling in numbers due to habitat loss and because they pose a threat to people.

“Hippos are declining at a rapid rate,” she says. “The more we learn about them now, the more we’ll be able to protect them in the future.”

Although they’re known to be very social creatures, their communication — what Maust-Mohl calls their acoustic repertoire — has only been studied by one other researcher.

Even in zoos, data collection poses a challenge. Maust-Mohl considers hippos an amphibious species, which means that evolutionarily, they have adapted to life on land and in the water-they are the closest living relatives to dolphins and whales. They produce sounds underwater and in the air, sometimes simultaneously in both mediums.

“It gives them an advantage to communicate with other individuals both above and below water,” she says.

Using a digital audio recorder and microphones in the air and underwater, she collects sounds produced by the animals and analyzes the data using Raven sound analysis software from the Cornell Lab of Ornithology (bird research) in Ithaca, N.Y.

“There are software programs that provide us with spectrograms, or visual representation of sounds that display frequency over time,” she says. “Audio files can then be visually inspected and measured to describe the parameters of the different sounds.”

Hippos produce a variety of different types of sounds, including underwater clicks that have been suggested to be a form of echolocation. Hippos produce other sounds such as snorts, whines, and grunts, but the most common sound is the wheeze honk, which is often produced as a chorus.

Later, the sounds are paired with video recordings so the sounds can be linked to the behavior to determine the function of the sounds.

Employing similar techniques, Maust-Mohl and Manhattan College students are researching the communication and behavior of giraffes at the Bronx Zoo.

During the past decade, giraffes have suffered an estimated 50 percent population decline. Today, only 80,000 may remain across Africa and some newly defined giraffe species could be threatened by extinction.

Like hippos, giraffe are a very popular species but there’s also very little known about them. To date, only one study has been published that reveals that although they appear to be silent, barring an occasional grunt, they may be communicating at very low frequencies that elude humans’ hearing range.

Other researchers have found that the use of infrasound can facilitate long distance communication. “In the wild giraffe may spread-out and travel far to forage, so low frequency communication may help maintain their social bonds,” she says. “It’s interesting to investigate why or how this type of communication evolved.”

For the past two years, psychology major Anthony DiCesare ’14 has assisted with the tedious and time-consuming process of data collection using specialized microphones that can pick up infrasonic soundwaves. He’s also involved in observation and analysis.

The experience was transformative to DiCesare who was inspired to switch majors from biology to psychology, and to follow in Maust-Mohl’s footsteps.

“We take behavioral samples of the herd, and later analyze and compare the data,” DiCesare explains. “We are finally able to focus on the analysis of the sound waves we obtained over the last two years. We hope to make progress on this before the semester ends.”

They are working closely with the curator of mammals, Colleen McCann, and supervisor, Brandon Moore, who work with the giraffes daily.

The Bronx Zoo has had a very successful giraffe herd, which is monitored as part of the Association of Zoos and Aquariums (AZA) Species Survival Plan (SSP) programs. SSPs are responsible for the management of populations in zoos and aquariums, including monitoring breeding programs, conservation research and veterinary care.

“The advantage of working with staff at the Bronx Zoo is they are also interested in doing the research, both to learn about the behavior of the animals and how we can better project them in the wild and in zoos,” she says. “It’s always important to see how research in zoos can be applied to the conservation and welfare of animals to help us understand their behavior and determine how changes in the surroundings influence their behavior, especially for animals that are endangered or threatened.” 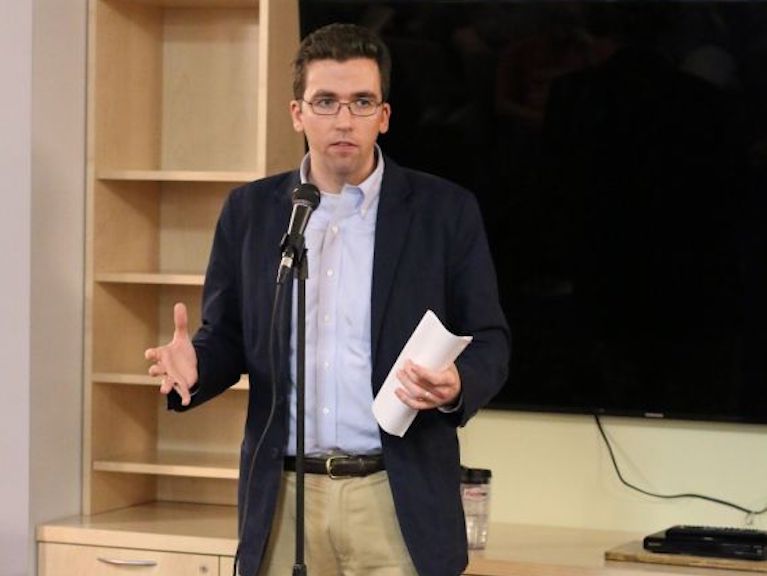