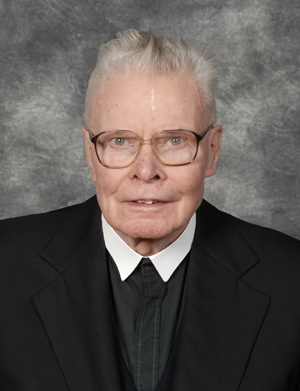 The Manhattan College community mourns the death of Brother Francis Bowers, FSC, Ph.D., former provost and academic vice president, and dean of the School of Arts and Sciences. Br. Francis passed away peacefully on Dec. 6 at the age of 93.

A native of New York City, Br. Francis was born Robert William Bowers in 1920. He graduated from Cathedral Boys High School and had a brief career on Wall Street before joining Manhattan College, where he would spend more than half a century.

“Brother Francis contributed greatly in many ways to the College, serving selflessly and always cheerfully wherever he was needed over the course of 54 years,” said Brennan O’Donnell, president of the College. “He was, first and foremost, an extraordinarily dedicated and effective teacher who challenged and inspired three generations of Jaspers. His life was a gift to his students and a blessing to his colleagues.”

In 1959, Br. Francis began his career with Manhattan College as a summer session instructor of English for three consecutive years. During his tenure at the College, he served as associate professor of English and World Literature; chair of the graduate and undergraduate English departments; dean of the School of Arts and Sciences, provost and academic vice president of the College; and academic adviser for intercollegiate athletes. Br. Francis was inducted into the Manhattan College Athletic Hall of Fame in 2004 for his involvement with Jasper student-athletes.

Br. Francis entered the Brothers of the Christian Schools in 1942 at the Barrytown, N.Y., Novitiate. In 1946, he graduated with a B.A. from The Catholic University of America, earned his M.A. from Fordham University in 1952, and also received his Ph.D. from Catholic in 1959.