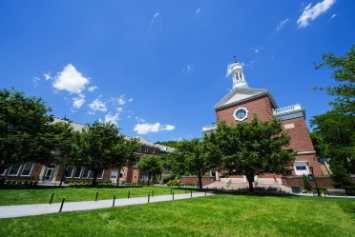 Their class years spanning the past seven decades, more than 500 Jaspers returned to the Riverdale campus on June 1–3, 2018, to reconnect with former classmates and support current students during Manhattan College’s 149th Reunion Weekend.

Participation was 66 percent higher than last year, with classes ranging from 1948 to this past May. Alumni came from as far away as England and Spain. “As always, Reunion Weekend was a true homecoming,” said Louis Calvelli, director of Alumni Relations. “Jaspers caught up with old friends and visited fondly remembered landmarks like O’Malley Library, the Chapel of De La Salle and His Brothers, and the Quad.” They also were impressed by newer gathering places like the Kelly Commons, he added.

The celebration began on Friday with a Golden Jaspers Cruise around Manhattan, a Silver Anniversary Reception for the class of 1993 and a party for graduates from 2008 to 2018. The milestone years of 1973, 1978, 1983, 1988, 1998 and 2003 attended a special reception in Kelly Commons. Saturday combined festive events with seminars and presentations. Alumni gathered on the Quad for the Green and White Picnic, and after Mass, the Reunion Weekend Celebration. A Veterans Coffeehouse drew graduates like Richard A. Lawrence Jr. ’68, an engineer who served in the U.S. Army.

At the Golden Jaspers Luncheon, President Brennan O’Donnell, Ph.D., presented 50th Anniversary alumni with the Brother C. Thomas Jubilarian Medal. Graduates from prior years received plaques. The applause was especially strong for Bill Leonard ’48, a World War II veteran. “I wasn’t about to miss my 70th,” the 94-year-old said.

A half-century after earning the Manhattan College degrees that launched their careers, the proud graduatesof 1968 marked their Golden Anniversary by making a reunion gift of $500,000 to support today’s Jaspers.

“I’m excited that we were able to meet our goal,” said Richard A. Lawrence Jr., who chaired the class of ’68 reunion committee. “Reaching our target reflects the hard work and effort put forth by the entire committee — and above all, the generosity of our classmates.”

A retired vice president at Citigroup Technology Inc., Richard enjoyed being able to work on the reunion with longtime friends. He attributed the attendance to help from “key classmates,” including Robert J. Byrnes, who served as Manhattan’s director of athletics for nearly 30 years, and Walter Olsewski, a former swim and golf coach at the College. “They did a great deal of reaching out,” Richard noted.

Overall, Richard concluded, the class of ’68’s success at Reunion Weekend offered a fitting tribute to a significant milestone in anyone’s life. “The participation was gratifying,” he said. “It was an excellent effort — and a lot of fun.”

View the entire list of anniversary donors from the class of 1968.

Celebrating the first “milestone” anniversary of their graduation from Manhattan, two alumni rallied their 25th Reunion classmates to raise a $75,000 gift in cash and pledges for alma mater.

Curt Zegler and Kerry Brooks Mitchell, class of ’93, said they were honored to be co-chairs of their reunion committee. “We wanted to make a bold statement about what Manhattan means to us,” said Curt, a vice president at Turner Construction Company. “We all appreciate what previous alumni contributions did for us 25 years ago. Now it was our turn.”

For Curt, presenting his classmates’ gift at Reunion Weekend was an uplifting way to show their appreciation. “It was a memorable experience,” he said. “Stepping up with Kerry to hand the College a $75,000 check — that definitely makes a statement.”

“How often do we get to celebrate our 25th reunion?” said Kerry, a territory manager at Clovis Oncology, a major biotechnology company. “When the College asked me to serve as a co-chair, I knew I was going to accept.” Her “strong competitive streak” made the opportunity especially appealing, she added. So did her family connections to Manhattan: her father, Kevin ’66, and brother Kieran ’01 also are Jaspers.

A former member of the crew team, Curt has co-chaired the Manhattan College Regatta, volunteered at activities like Accepted Students Day, and served as the De La Salle Medal Dinner’s vice chair for the past 15 years. Kerry is an avid contributor to initiatives including the Annual Fund and the Dr. James Suarez Endowed Chair in the School of Business. “Kerry and I carry the same feelings about our roots,” said Curt. “Serving as co-chairs was a natural next step.”

View the entire list of anniversary donors from the class of 1993.

Save the date for the 150th Reunion Weekend, which will be held May 31-June 2. Visit manhattan.edu/reunion for ongoing updates.

Read about selected donors and why they choose to support Manhattan College.